India and Indonesia are home to many of the world’s remaining rhinos. However, before their numbers became so desperately threatened, these magnificent animals could be found throughout this area of the world. In fact, they were found throughout Pakistan, Bhutan and Bangladesh (in which they are now extinct), as well as in parts of Nepal and, possibly, Myanmar, Indochina and the southernmost regions of China. Today, however, they are limited to inhabiting small areas of Nepal, Bengal and the valley of Brahmaputra. Indeed, north-eastern India is one of the few remaining locations in the world in which to find rhinoceroses. In India, Kaziranga, Orang, Pobitara, Jaldapara, Dudhwa are the areas best known for being home to rhinos today. 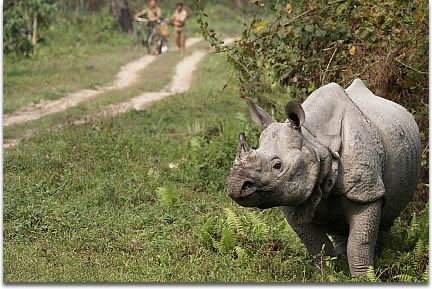 The rhinos found in these habitats live off juicy leaves and fruit (as opposed to being grazers that live primarily off grass, as is the case of the White Rhino in Africa). In addition, they will happily live on cultivated crops. They thrive off the minerals found in site licks, and will seek these out as part of their heitehy diet. Therefore, it is important that the areas that rhinos now occupy throughout India and Indonesia retain their natural abundance and variety in order to provide the necessary diet to these animals.

Kaziranga National Park has been declared a sanctuary and is, therefore, one of the safer habitats for the rhino. As such, it is home to approximately two thousand of these animals. In fact, there is the largest population of rhino in India in this park alone, being home to almost two-thirds of the total Indian population. Kaziranga lies along the banks of the Brahmaputra River, ensuring that the rhinos, who love water, have ample supply.

It was declared a sanctuary in 1940 and has been protecting its valuable resources ever since. However, between poachers and the ever-present danger of a natural disaster, the rhinoceroses of Kaziranga National Park continue to face the very real threat of extinction.