The Dicerorhinus sumatrensis, more commonly known as the Sumatran Rhino, is the smallest of all the remaining rhino species. It is best known for its shaggy appearance, which is as a result of long, coarse hair on much of its body. Other rhinos have very little hair;limited to tufts on the tips of their tails, out of their ears and their eyelashes.

The Sumatran Rhino (sometimes also known as the Bornean Rhino), however, has a lot of hair all over its body. With age, this hair falls out, so the age of the animal can, to some extent, be determined by the amount of hair a rhino has. This hair covers a hide that has a rather red undertone to it, making this rhino really unique in appearance. The hairiness of the Sumatran Rhino has led many scientists to maintain that this species is a direct descendant of the woolly rhinoceros, which has been extinct for some 10 000 years. 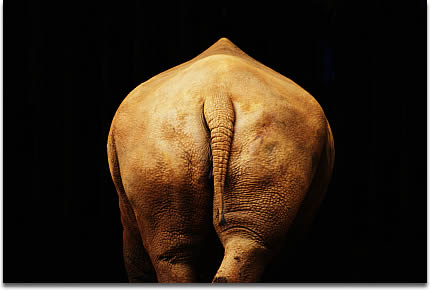 Rear or back side of Sumatran Rhinoceros.

The Black Rhinoceros has two horns on its snout. The front horn is large and prominent, while the one behind it is far smaller. The horn is made of keratin and is not attached to the skull structure. This horn can grow back if trimmed, and has been the major reason for the illegal poaching of rhino.

It is valuable for its ornamental use in the handles of certain weapons and for its medicinal uses. During the early part of the 19th century, this was one of the most prolific rhino species in existence.

There are three Sumatran Rhino subspecies:

•The Western Sumatran Rhino (Dicerorhinus sumatrensis) there are only about 200 of these rhinos left in the world, most of which live in the protected environment of national parks.

•The Eastern Sumatran Rhino (Dicerorhinus harrissoni) today, there are only about 50 of these rhinos left. These ones live in Boreno, Sabah.

•The Northern Sumatran Rhino (Dicerorhinus lasiotis) many believe this subspecies to be extinct, although there may be a few specimens alive in Burma. Due to complicated political circumstances, it has not yet been possible to ascertain whether these theories are true.

In the wild, the Sumatran Rhino walks amongst thick vegetation, which often pulls and scrapes much of their body hair off. Therefore, specimens in captivity appear far shaggier than their wild counterparts.

Interestingly, the Sumatran Rhinoceros is agile and can achieve high speeds. It climbs mountains, steep slopes and slippery riverbanks. Its natural habitat is, therefore, perfectly suited to it. This natural habitat comprises rainforests situated in the highlands as well as swamps. Rhinos are independent animals and enjoy occupying wide areas of personal territory. For this reason, males will occupy up to 50 square kilometres and females up to about 15 square kilometres. Male territories may overlap, but females prefer to live far away from another female rhino.

The Sumatran Rhino feeds during the cool hours of the morning and early evening. They can eat up to 50 kilograms of vegetation per day, made up mostly of tree saplings. Site licks are another very important source of minerals for the rhino.

The Sumatran Rhinoceros uses its ability to vocalise extensively. In fact, it is known as being the most vocal of all the rhinos. The most common sound is a short yelp known as an eep. There are, however, longer-lasting cries that are also commonly used in their communication.

The Sumatran Rhino female reaches sexual maturity at between six and seven years of age while males are only sexually mature at about 10 years of age. The female will be pregnant for about 15 months before giving birth to one calf. Efforts to breed these animals in captivity remain relatively unsuccessful.

As with all other rhino species, the Sumatran Rhinoceros is threatened primarily by illegal poaching for its horn. This horn sells for enormous amounts of money for its ornamental and traditional medicine uses. It has two horns;the front one being far larger than the one behind it. This species is Critically Endangered and requires legal and humanitarian aid in order to preserve it.