Rhinoceroses are, generally, solitary animals that prefer to live an independent life. White Rhinos tend to be a little more social. However, they all demand their own territories, particularly the males of the species. In order to ensure that they can secure their territory, certain behaviour has been established. This behaviour is sometimes aggressive, and sometimes displayed merely as a warning.

It is not always clear to researchers and onlookers where exactly the territory of one rhino ends and the next begins. Territories are marked, or claimed, by the rhino’s spraying urine at regular intervals on the trees and bushes of the area. 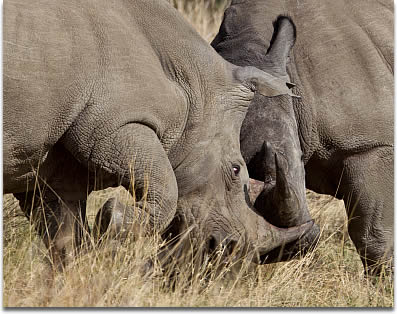 They will squirt urine onto a tree, bush or trunk every five to six minutes when establishing their territory. They will also scatter their dung throughout the region. Rhinos make extensive use of their sense of smell to communicate to and with others that they are present. Therefore, when other rhinoceroses enter the territory, they will be aware of the presence of another animal, implying that the territory is not available for habitation.

Territorialism among rhinos effectively limits the number of these animals that can inhabit a specific area. This is becoming increasingly important as habitat loss becomes more of a threat to the rhino’s survival. This is also of vital importance within a game reserve, where there is limited space available. If rhinoceroses are forced to co-exist in a space that does not allow for them to establish their own territories of the size they need, the results have been severe stress, injury and death, as they fight aggressively to establish dominance.

In order to scare off intruders, rhinos will usually charge at them. Because their eyesight is not at all good, this is a blind charge and can even lead to them running straight into a tree or other foliage. When running, a rhino can reach speeds of about 55 kilometres per hour (or around 35 miles per hour).

Surprisingly, rhinos can change direction quickly and deftly, even when running, which is unexpected due to their size and heftiness. When covering longer distances (chasing another rhino right off their territory, for example), this animal can maintain a speed of about 30 miles or 50 kilometres per hour.

Certain rhino species are less aggressive than others. The White Rhino is known for being more sociable and placid, while the Black Rhino’s aggressive attacks have been known to occur with no apparent provocation. Males are certainly more aggressive than females across all species of rhino. Females are frequently killed in aggressive attacks from territorial males and are unable to defend themselves against the males’ strength and sheer force. However, for the most part, females are tolerated within a territory that belongs to another rhino. Young bulls only stand a chance of winning over territory if the original inhabitant is old, weak or injured in some ways.